Welcome to one of my first procedural software projects, a simplistic procedural character generator! Created for ProcJam 2017, this is intended as a prototype of the systems one could use to make procedurally generated characters in a game of some kind. Check out all the savory behind-the-scenes details below:

But first, thanks to RandomLists.com for a list of random names and to SKCphotography for their awesome Light Parchment image (https://www.flickr.com/photos/sharonuk08/3751270375). If you people manage to come across this page somehow, know that this project is just that extra bit shinier thanks to you.

If you’ve used the generator yet (please do!) you’ll notice that it determines things such as the character’s name, aspects of their personality, their occupation, and their greatest desire. It does so by first randomly selecting things such as a character’s moral leaning, and their levels of introversion and logicalness. Next, it takes their extroversion and logicalness traits, uses these to alter the probabilities that it thinks a character would have a certain occupation, and then selects an occupation for them based on these probabilities. From there, it takes their occupation and their moral leaning and uses the combination of the two to alter the probabilities that the character would have one life goal or another, and proceeds to select one such life goal.

For obvious reasons, the generator is nowhere near a perfect representation of how being a person works. For one thing, there are more than four occupations for a person to choose from, not to mention a vast multitude of life goals. Moreover, the assumption made by the generator’s algorithm that one’s extroversion and logicalness are the only things that define their occupation is preposterous. I intended this generator more as a prototype of the systems that could be used to generate characters rather than a genuine simulation or commentary on the human condition.

Thanks for checking it out, and Happy ProcJam! 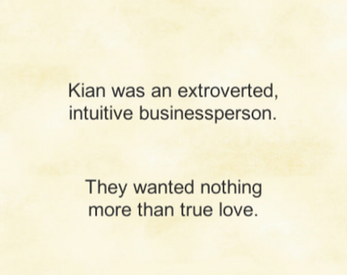